Dasani has a new product. Its flavored water. On the bottle there is the legend Lemon Flavored Water Beverage.

Doesnt that sound suspiciously like Kool-Aid to you? I asked the very put upon café matron.

Look, she said. It sucks. Leaves an aftertaste, the lemon does. I had to throw it out. It sucks. She sighed heavily and allowed her head to drop back. Do you want it?

I have decided to throw my hat in the ring and run for Pope. If elected, my first official Papal Act will be to take my Pope name. I have decided that I will be known as Pope Persnickety III.

God has spoken through me and I am infallible, I will retort. Kiss my ring and fashion something pretty for me out of gold. And send up the white smoke already. WE HAVE A POPE, MOFOS! WE HAVE A POPE!

Then I will spend my time tooling around in the Pope-mobile solving crimes with the help of two teenagers, an African American man in a wheel chair in his mid-forties named Jerome, and a talking kangaroo named Jethro which we will have rescued from poachers on our very first adventure together. The teenagers will be fraternal twins named Jason and Jenny. Both will have winning smiles and be searching for their paths. I will provide spiritual, and as Jason and Jenny will have been orphaned, paternal guidance. Jethro will be a computer expert and occasionally will channel the Holy Spirit for us when we need help locating clues. When the Holy Spirit is speaking through him, his eyes will turn to balls of flame, his voice will sound as if it has been digitally altered to be scary, and most miraculously he will be able to walk. Jethro will want desperately to be human some day and will examine what it means to truly be human from a perspective outside the species. I will carry a variety of hurling weapons secreted away within my Papal robes and will employ them for protection as needed.

Together we will be known as Pope Persnickety III and the Papal Patrol.

I will retain exclusive motion picture, television, print and other media rights.

I know that there are some hurdles to my ascendancy to the Papal Throne. Im not Catholic. Im not a Cardinal, not even a priest. Most damning, Im an American. But Im also a boy with a dream. I hope I can count on your support, and by that I mean your vote. Together we can take my dream into the future. 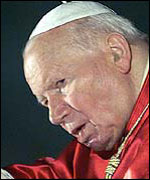 previously on Sooner  next on Sooner